Seeds of a Sisterhood

The Seeds of a Sisterhood

When I was just 11 years old my family and I travelled to India to volunteer with a charity  that supported impoverished children and families living in slums by providing education and financial aid. Being the same age as many of the kids we worked with, I quickly befriended several of them. One of the older girls, Dilshaad, had an after school responsibility of  cleaning and cooking at the volunteer apartment, where my family and I lived. We quickly bonded, as everyday after school Dilshaad and I would take a rickshaw home together, giggling and laughing as young girls do.

India’s climate can be challenging for foreign visitors. As the days grew hotter, heading into March, we were informed of a nearby swimming pool by a fellow volunteer. Of course we got all excited and I asked Dilshaad to join us so I would have a friend to swim with. She seemed thrilled, I was pumped and we all walked there together after school that day. But as we arrived at the gates of the pool building a guard came out from behind the gate, pointing at Dilshaad, speaking rapidly in Hindi, and waving his arms. Dilshaad was sitting outside waiting, not even attempting to try and come inside. I was confused and worried that I had done something to offend her. While we were quite close, my very broken Hindi and her patchy English could not always articulate more intricate or sensitive issues.

When I think back on it now, I believe this is what upset me the most. Dilshaad knew ‘her place’ and was so used to being treated like she was in the lowest class, it wasn’t a second thought to her. She just knew she would not be allowed inside by the guard.

Dilshaad looked upset, and said she had to go. A fellow volunteer translated the guard’s words; the group of volunteers were welcome in the pool, but we could not bring Dilshaad inside. At this point Mom and I shared a stunned look, far too slowly comprehending the reality of the situation. I’ll never forget the sinking feeling in the pit of my stomach upon understanding. As affluent white people, we could go into any building we wanted. But Dilshaad? Well, she was a street urchin. A Dalit, ‘untouchable’—people tainted by their birth into a caste system that deems them inmpure, less than human.

We are all individuals with equal worth and in that moment I was brought to the unpleasant reality that this was not a universal fact for many people. As a kid, all I saw in Dilshaad was a fellow child, a person, a girl just like me. Before the pool incident, Dilshaad was simply my new best friend. But after the incident, she became my best friend who was not allowed to live the same life as me. She was no different from me, and yet, we were in vastly different life circumstances, simply by the luck and chance of birth. While I could travel the world, go to any university, get any career, go into a pool if I wanted, Dilshaad did not have any of those freedoms. She did not have the choice. Regardless of her desire to get an education and have a career, she had no access to post secondary schools, and her future  only offered work in menial low paying jobs.. She was a brilliant, highly intelligent, stunning and impressive woman, and yet none of that mattered.

That first trip to India ignited the fire within me, one that cried out in protest, one that could not come to terms with the injustice that I was born with so much privilege, and she was born with none.

I could never make up for the horrible discrimination that she and the other children faced, but I could at least let her know that she was loved and supported by her friend. We grew quite close, laughing together, sharing stories of our lives, as she helped me navigate life as a young girl in India.

I never went to that pool, choosing instead to learn how to make chai and cook fried paneer cubes from Dilshaad and walking with her every day from school.

On my very last day in India, Dilshaad gave me a beautiful heart shaped ring that I had seen her wear every day that I knew her. This selfless gesture touched my heart and truly showed me how close we had become. That ring was one of the only jewellery items that she owned. It sits at my bedside today, reminding me of my strong, smart, sassy and loving best friend.

Divineya Society is built in the spirit of sisterhood, of friendships, of family, of community, and the love, care, and support that emanates from that. My connection with Dilshaad was one of my first powerful sister-friendships, and it is one that I will treasure for the rest of my life. I found a piece of myself in her, and I am forever grateful for her love and acceptance of me. 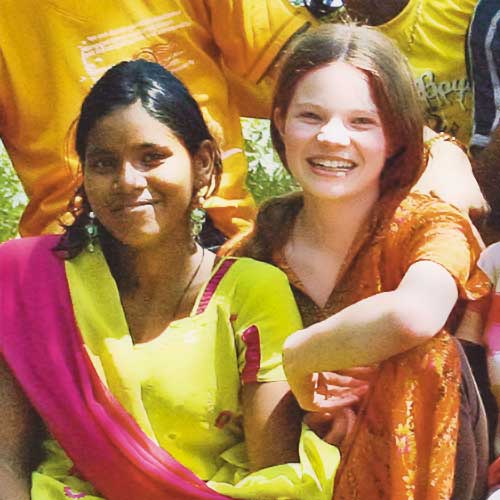 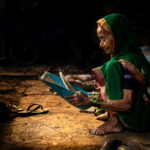